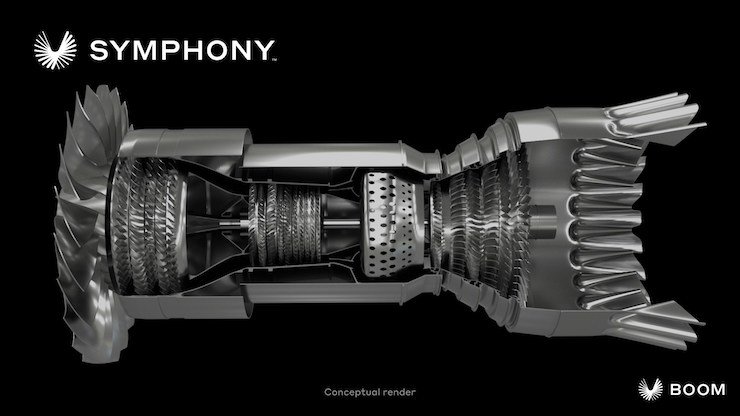 GE Additive is to work with Boom Supersonic on its new Symphony propulsion system designed for its Overture supersonic airliner.

Boom Supersonic’s Overture aircraft is being developed to fly at twice the speed of existing airliners, while also running on 100% sustainable aviation fuel.

Symphony is being designed to power this airliner and will leverage ‘proven technologies and materials’ to achieve ‘optimal supersonic performance and efficiency.’ Boom intends for Symphony to operate at net zero carbon and meet Chapter 14 noise levels, while also delivering lower maintenance costs and reduced overall operating costs for airline customers by 10%.

GE Additive will provide additive technology design consulting to Boom Supersonic in a bid to streamline the development of the propulsion system, as well as reduce the weight and improve the fuel efficiency.

“Developing a supersonic engine specifically for Overture offers by far the best value proposition for our customers,” commented Blake Scholl, founder and CEO of Boom Supersonic. “Through the Symphony programme, we can provide our customers with an economically and environmentally sustainable supersonic airplane – a combination unattainable with the current constraints of derivative engines and industry norms.”

Boom Supersonic has also announced that Florida turbine Technologies will aid with engine design, and StandardAero will contribute on the maintenance side.

Symphony will be a medium-bypass turbofan engine with the same basic engine architecture that currently powers all modern commercial aircraft. Unlike subsonic turbofans, this new propulsion system will include a Boom-designed axisymmetric supersonic intake, a variable-geometry low-noise exhaust nozzle, and a passively cooled high-pressure turbine.

Engine design features to include:

Boom Supersonic has previously aligned with additive manufacturing firms Stratasys and Velo3D, partnering with the former until 2026 and using technology from the latter in the production of its XB-1 aircraft.