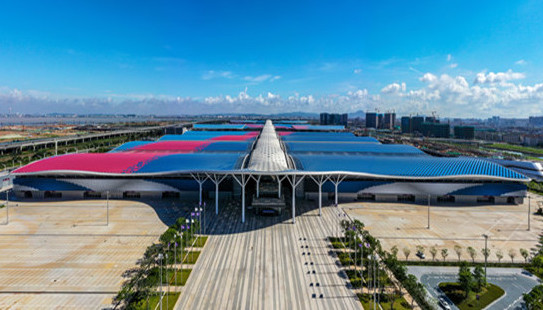 Air way
7 km to T3 of Shenzhen International Airport, 3 km to T4, and only 75 km to HK Airport.
Water way
Closely located to Fuyong port, 1 hour to HK, Macao, Guangzhou, Zhuhai by ferry.
Freeway
Directly linked to two freeways (S3 and Guangzhou-Shenzhen Highway) and one express road (Haibin Boulevard). The overpass project featuring Shenzhen World toll gates along S3 Phase II has been open. The project is also going to link Shenzhen-Zhongshan Tunnel, and the interchange between Shenzhen International Airport and He’ao to form a highly connected transportation system.
Metro:
The Fuyong and Qiaotou stations in the current Metro Line 11 are only 5 km from the venue. Line 12 and Line 20 under construction will directly serve the venue with two metro stations, Shenzhen World South and Shenzhen World North. Line 20 connects Shenzhen World with the Shenzhen Airport with only one metro station in between and offers transfers to Line 11 and the Guangzhou-Dongguan-Shenzhen inter-city railway. Line 12 will offer transfers to Line 2 in Dongguan in Guangzhou.
Railways and High-speed rail
The venue is next to the Sea Garden Station along the Shenzhen-Maoming Railway under construction and the Guangzhou-Dongguan-Shenzhen Inter-city Railway expected for services in 2019. Planning for construction of the high-speed train station in Shenzhen International Airport has already been officially approved.